In Belgium, a new leftwing extremist group, the Communist Combatant Cells, announced its arrival in October 1984, with a number of bombings in Brussels against facilities of Litton Data Systems, the West German truck manufacturer MAN, and Honeywell-Europe. In communiques claiming credit for the actions, the CCC linked the targets to NATO and particularly to the deployment of cruise missiles in Western Europe. Subsequently, the CCC also carried out two attacks on Belgian political party offices, alleged to be part of the support structure for NATO "imperialism." The following month, the CCC bombed an antenna tower and a communications station at Bierset Military Airfield near Liege, where aircraft assigned to NATO are based. Finally, in December, the group conducted a half-dozen attacks against the pipeline bringing fuel from West Germany for NATO forces.

Belgium. The CCC continued to target US and NATO facilities in 1985, although by the end of the year domestic commercial and political installations had become increas- ingly favored targets. In January, two US military personnel barely escaped serious injury when the CCC detonated a car bomb outside the NATO Support Facility in Brussels. Previous CCC attacks had been limited to property damage, but, in a communique following this bombing, the group claimed that US military personnel were appropriate terrorist targets.

In May the CCC caused its first fatalities when two firemen were killed trying to defuse a car bomb set by the group. The CCC received so much negative publicity following the deaths of the firemen that it later claimed that the police were actually responsible because they had not arrived at the scene quickly enough. To emphasize the point, the CCC bombed the gendarmarie administrativeoffices in Brussels a few days later. In December 1985 Belgian police arrested several leading CCC members and subsequently discovered CCC safehouses.

In April a previously unknown group - FRAP - surfaced, claimed responsibility for several attacks, including the bombing in April of a building housing the North Atlantic Assembly. By the end of the summer, Belgian police had located a FRAP safehouse and later in the year discovered others.

Belgium. Fewer attacks occurred in 1986 than in 1985. Arrests of virtually the entire infrastructure of the Comrnunist Combatant Cells (CCC) in December 1985 and the discovery of several of the group’s safehouses in January 1986 effectively halted the CCC’s 15-month terrorist campaign. 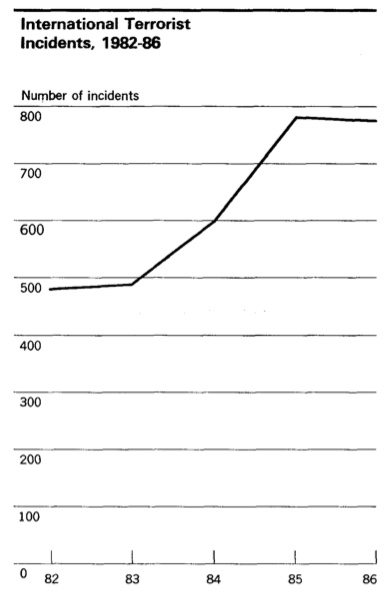 There are a wide variety of definitions used by experts to describe the phenomenon of terrorism, but no single one has gained universal acceptance. For purposes of recording and coding data on terrorist incidents, we have adhered to definitions that represent a middle ground within the broad range of expert opinion, both foreign and domestic. Terrorism is premeditated, politically motivated violence perpetrated against noncombatant targets by subnational groups or clandestine state agents.

International terrorism is terrorism involving citizens or territory of more than one country.